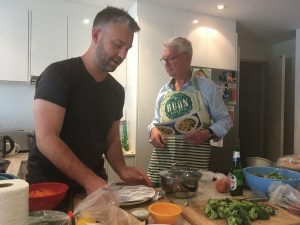 Without being sexist who cooks in your house?

Although celebrity chefs on TV are mostly male and 60% of NZ chefs associations >900 members are male,1 when it comes to the home kitchen men are poorly represented.

In 2015 an online survey by New Zealand Pork found nine out of 10 women said they were mostly responsible for doing the shopping, deciding what to eat and cooking the evening meals for their household.2

Just over half the women who had a partner and did most of the cooking would like their partner to shoulder more of the load and cooking was considered an appealing quality in a partner by 89 per cent of the women surveyed.

While women still undertake most of the cooking burden around the world changes in chore division in the home are occurring.

Time use studies in America have found that the responsibility for cooking in the home has dropped for women from 92% in 1965 to 70% in 2015. While for men cooking responsibility has increased from 29 to 49 percent within the same time frame. 3

Other researchers have found in the US that in studies of dual career couples, salaries affected cooking. The more a women earned than the man, the more often he cooked and the less other house-hold chores he engaged in.4

Canadian researchers have noted that while women see cooking as a chore, men (especially those with few or no childcare responsibilities) view it as “work-leisure” activity (neither one thing nor the other) and enjoyed it more. 5

These researchers postulated that the use of kitchen equipment and opportunity to place photos of their cooking efforts on Instagram probably contributed to mens more positive experience.

Why does it matter who cooks?

Traditionally men worked away from home and hunted and women raised children and cooked. Family recipes and cooking skills were passed down each generation. This is still the case in many countries around the world.

However as more women work outside the home, families become more fragmented and traditions change, cooking skills are being lost by both men and women and this social change is influencing our health and education.

In 1995 interviews with youth in Auckland found the majority had learnt cooking skills and nutrition at intermediate school and through their family.6

However by 2005 a study sponsored by Watties® found that the only food preparation 439 children aged 8-14 years felt confident with was in making toast and a sandwich.7

Further studies by Weight Watchers in 2012 of 1000 people in the Generation Z age group studied (born from 1990) found cooking skills were being lost. Four out of five didn’t use any fresh ingredients. Twenty five percent couldn’t identify staple vegetables such as leeks or zucchini. Forty five percent said they don’t know how to cook.8

Research by Vegetables.co.nz in 2016 confirmed a decline in our “cooking literacy” which they defined as the skills, knowledge and confidence needed to prepare and cook healthy and culturally appropriate dinner meals that are nutritious, tasty, quick and affordable. 9

These researchers believe the decline in cooking literacy was due to:

Decline in health and education

Food is essential to life as it supports good mental and physical health, well-being, productivity and quality of life. For children food promotes growth and their ability to learn and reach their full potential.10

For people to make good food choices and to take control over their health they need cooking literacy and as the food environment changes this becomes more important.

Improving cooking skills may also help to lessen the impact of food poverty which is now experienced by one in five NZ households.9

While people may want to feed their families well, a lack of cooking literacy has been found to lead to a higher reliance on eating out, fast food restaurants and ready-made meals.

New Zealand is beating the USA when it comes to KFC franchise outlets per capita with one for every 41,000 New Zealander compared to one per 77,000 Americans.11

In 2016, 66% of NZ adults and 33% of children were obese or overweight and NZ rank third fastest country in the OECD.12 Obesity not only increases the risk of diabetes, hypertension and cardiovascular disease but also affects self-esteem, academic outcomes and future earning potential 10

For better health, dietary guidelines around the world recommend a diet that is based on fruits and vegetables, lean meat, fish, legumes, milk products and whole grain cereals. Studies in Canada have shown that children and adolescents who prepared their own foods made better food choices and had higher intakes of fruits and vegetables, dietary fibre, folate, vitamin A and calcium.13

Conversely diets high in pre-prepared processed and fast foods are usually higher in calories, sugar, unhealthy fats and refined carbohydrate the frequent consumption of which is associated with obesity and greater risk of long-term illness.14

Cooking is a process

Practical cooking skills are a collection of processes gathered over time and dependent on a persons physical and mental ability such as:

A Canadian study in 2012 looked at these components and found that men rated themselves as being good at cooking raw meat, chicken or fish; peeling, chopping or slicing fruit and vegetables and handling kitchen knives safely.14

Women generally felt competent in the kitchen but also felt more capable than men at adapting recipes to be healthier by reducing fat, salt and sugar and adding more vegetables

Although families lead busy lifestyles these days, encouraging parents to prepare healthy food in the home (most of the time) can benefit the educational outcomes and health of their children.

At a National level these things can help to reduce food waste, improve the quality of life, reduce food costs, increase productivity and reduces the strain on the health system.

Improving our diet and health is not just dependent on parents but also changes within the school curriculum to ensure that cooking skills being taught align with healthy eating guidelines.10  Also that government legislature helps to create an environment where it is easy for us all to make healthy food choices and gain regular exercise.

• Plan meals together and shop with a list. If time poor, buy food online and remember to also plan for healthy breakfasts and lunches too.

• People who are flatting or those wanting to try new foods might like to try buying in meals where the ingredients and recipes are provided such as Marley Spoon® or My Food Bag®. Having all the foods supplied and delivered (including spices/oils etc) with glossy recipe sheets make cooking easy and fun.

• Every so often cook extras and freeze leftovers so that rather than buying takeaway you do have meals on hand to heat and eat if you are running late home from work.

• Couples may enjoy sharing the cooking or taking turns on different nights.

• If you have children take the time to involve them from a young age in undertaking some of the cooking chores such as setting tables, making salads, helping to put away groceries and doing dishes.

• Spread the load of cooking by encouraging everyone to develop their own signature dish and make this (or variations of it) regularly.

• Fight food boredom by trying a new recipe each week

• Men are competitive. Sharing their cooking achievements on Facebook and Instagram encourages other men to try cooking too.

If you require assistance with weight or other health issues then contact us today.

Other articles by Lea on similar topics:
Could you make healthier decisions when shopping
10 tips to prevent weight gain in marriage
Why are NZ men getting fatter, faster than women?
Have you lost your “Mojo” lately?
Simple ways to improve mens health

References
1. Corry, L Women in the kitchen:why men get all the glory in restaurant kitchens. 2016 The Press. Aug 28 https://www.stuff.co.nz/life-style/food-wine/food-news/83609777/women-in-the-kitchen-why-men-get-all-the-glory-in-restaurant-kitchens

4. Besen-Cassino,Y. Cassion D. Division of House Chores and the Curious Case of Cooking: The Effects of Earning Inequality on House Chores among Dual-Earner Couples About Gendre 2014 3(6) http://www.aboutgender.unige.it/index.php/generis/article/view/176