Why are NZ men getting fatter, faster than women? 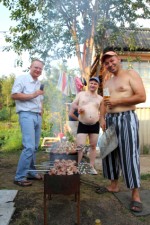 Men’s health in New Zealand has deteriorated at a faster rate than women’s over the past 12 years. The results of nutrition and adult health surveys between 1997 and 2012 give us some clues as to why this may be so.

Although men do  have a faster metabolic rate than women (at rest and during activity)  it appears that ‘getting into shape’ is harder for them with 40% of men compared with 30% of women being classified as overweight in the last National Nutrition Survey (2011/12).

When fat accumulates around the abdomen there is an increased risk of diseases of the heart, pancreas, gall bladder and liver (as well as a decline in prostrate and testicular health in men). This abdominal (visceral) fat is determined by the ratio of waist to hip measurement which for good health should not exceed 0.9 for men and 0.8 for women.

The 1997 Survey found that this risk factor increased with age with 70% of men in the 44-64 year age group over the limit compared to 50% in women in middle age. While recent stats on abdominal fat are unavailable the longer term effects on men’s health are now apparent.

The complications of obesity

As weight is gained there is a corresponding increase in a variety of diseases and deterioration in health.

As weight increases abdominally the pancreas is less able to secrete sufficient insulin, of good strength to handle elevated blood sugar levels and diabetes results. This now affects 6% of men and 5% of women in New Zealand up from 2-4% in adults in 1997.

Fewer visits to the doctor

In the 2011/12 adult health survey it was found that men have fewer visits to their doctor (74%) compared to women (82%) so this may contribute to men’s deteriorating health not being recognized as quickly as it should.

Exercise is an important way to control body weight and men appear to be more physically active (57%) compared to women (50%) in 2011/12. It is recommended that all adult New Zealanders aim to increase their activity to between 30-60 minutes each day.

So if men are more active than women in 2011/12 why are they becoming more overweight?

A closer look at the differences in the diet of men and women in 2008/9 may offer some clues as to the trends we are seeing now.

The accumulation of saturated fat in the arteries increases the risk of obesity, diabetes and heart disease. This is how men have been eating more of this type of fat than women.

An excess of dietary sodium can be associated with hypertension and stroke. In New Zealand men in 2008/9 were choosing to eat lower salt or salt reduced foods (12.3%) less regularly than women (16.2%).While their (medicated) blood pressure levels have improved in the 2011/12 survey, stroke remains a risk factor for them.

Good hydration is important to prevent bladder and bowel problems, as well as prostate cancer and erectile dysfunction. Water and low-fat milk are recommended.

Fruit juice and carbonated drinks are a major source of sugar and energy which can contribute to weight gain and the development of diabetes.

It will be interesting to see the impact of energy drinks on these statistics when they are released later in 2013. For more information on the consumption of carbonated drinks read Lea’s article “what are our children drinking?”.

Whether caught up in business meetings; socializing with friends at the rugby or enjoying a beer over the barbeque, there are plenty of opportunities for men and women to drink.

Unfortunately alcohol has a major effect on abdominal fat and obesity.

There were some improvements in men’s health 2011/12

Motivation is the key

It may take a colleagues heart attack; a new girl friend on the scene; the desire to run the coast to coast or to gain selection to play golden oldies in order for men to change their diet and exercise routines.

Simple ways to improve men’s health
Tips to get off the couch
Have you lost your mojo lately?

or contact us for a personal assessment and help.