Could you make healthier decisions when shopping? 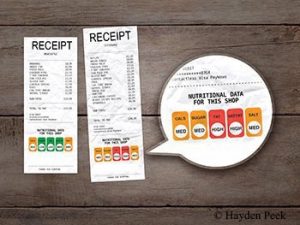 How do you rate the healthfulness of the food choices you make when shopping?

What type of milk, bread, snack foods, meat and biscuits do you buy?Because every food item we drop into our supermarket trolley isn’t just affecting us but also the health of those we provide food for.

We each have the power at that shopping moment to build stronger fitter bodies and we need to start taking shopping for food and drinks more seriously if we want to reduce the cost of our health care and waste and build more productive, revitalised lives.

Currently around 65% of NZ adults and 35% of children are either overweight or obese and the number of people with diabetes has doubled in the last 10 years. This is placing a great strain on our health and social services.

As not everyone speaks the same language, has the same food preferences or nutrition knowledge to decipher nutrient information, governments around the world are now looking for ways to direct shoppers to healthier food options at the checkout.

Health initiatives at the point of sale

Encouraging people to think about health when handing over cash for foods and drinks is an important step towards building a stronger nation.

In the UK a traffic light system is used on the front of label packaging showing green, amber and red to indicate which food choices are the healthiest. (Hint- green is best).

Now new research by Birmingham University is looking at taking this system the next step to enable the shopper to print out the choices they made onto their till receipt which could revolutionise the way food is bought.

The system shows the total data for calories, sugar, fat and salt in a person’s shopping basket and highlights the total in green, amber or red (as depicted in the photo above).

Lead researcher Matthew Cole has found that 83 percent of people currently use traffic light information to assist their shopping and more than half of those studied would like to see this information on their till receipts.

Interestingly over 42% of people said that health was their key consideration now when buying food while only 23 percent cited cost despite earlier research stating cost as the main driver of food choice.

It is hoped that the new concept could be extended to incorporate supermarket self-scanning devices which could track the nutritional value of a shop as consumers go, and offer up alternative ‘healthier’ products.

The 5 star rating adopted 2 years ago by Australia and NZ is a voluntary, front of label system designed to assign a greater number of stars to foods lowest in salt, sugar, energy and saturated fat but high in dietary fibre. This system is getting mixed reviews.

Unfortunately some companies have engineered their food products to have high protein and fibre levels in order to off set higher sugar and salt levels and improve their star ranking.
To remove this loop-hole the system is undergoing review in a bid to reduce the added sugar in foods.
(The author believes that this system would also prove a more powerful tool if made compulsory on all food items).

These have been considered in the UK.Recently 53% of British people gave the “thumbs up” to the idea in a survey by the Royal Society of Public Health (RSPH) in the UK. Subjects intimated that they might reconsider their food choices if symbols, showing how far people would have to run or walk in order to use the calories in foods they were about to consume, were to be placed on the front of food labels.

The use of spoon full of sugar and salt on packaging to show its content in foods and beverages is being considered by the British government as part of an obesity strategy now made possible with Brexit.

Lessons learned from the tobacco industry are now being considered for food items. In the USA consideration is being given to the use of graphic pictures similar to the health warnings used on cigarette packets to show the destruction to teeth and weight gain incurred when the intake of sugar sweetened beverages gets out of control.

Change to foods at checkout counters

In an effort to curb the impulse buys made at their checkout counters the  Lidal supermarket chain in the UK has removed junk foods such as sweets, chocolate and crisps from the check outs in 600 stores. In their place they offer healthier alternatives such as bottles of water, sugar free gum, small packets of dried fruit, nuts and seeds and fresh fruit. This measure has met with very positive feedback from parents of young children.

There is still a lot of controversy as to whether or not taxes added to foods and drinks can be used to modify shopping behaviour and reduce the consumption of foods deemed harmful to health.

Euromonitor International has reported that 19 countries have introduced ‘sin taxes” to food and drink in an effort to reduce sugar consumption by 20 percent in line with World Health Organization recommendations.

In Berkely California the consumption of sugar sweetened beverages (SSB’s) has fallen by 21% while water consumption has risen by 63% since the taxing began in 2014. While it may take time before these changes filter down to a reduction in obesity and type 2 diabetes it is a good start.

In Mexico where 70% of the adult population are overweight or obese a sugar tax on SSB’s produced a 5.5% drop in SSB consumption in the first year of tax introduction 2014 and 9.7 % drop in 2015. With a population of 112 million it is hoped that this initiative will lead to better health.

Take action now to improve your own health

While governments can regulate the food industry to alter the supply of foods harmful to health in the end it is up to each one of us to choose what we swallow.

We don’t only shop in supermarkets we also buy foods and drinks from dairy’s, takeaways, restaurants, cafés, bars, service stations, stadiums, hospitals, transport depots…food and drinks surround us every day.

If you value your health and mobility then think about the food choices you make today.

Other articles by Lea on similar topics that may interest you:

How to put real flavour into your cooking
8 tips to help you break the sugar habit
What are our children drinking?
Would activity icons alter your food choices?
Cutting sugar by half an Australian goal