Feeling full is the secret to weight loss 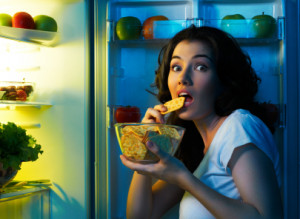 It is difficult to lose weight if you are hungry and tired because as blood sugar levels fall the brain begins hunting for food. It’s a natural survival instinct.

Unfortunately this is often confused, by those trying to lose weight, as being due to a lack of willpower which is often followed by feelings of guilt as they search for yet another biscuit or snack.

Gaining an understanding of the many factors contributing to a sense of fullness can provide some very powerful tools for those seeking to lose or control body weight and find more energy for life.

Australian researcher Dr Susanne Holt at the University of Sydney has developed a Satiety Index (SI).This helps to measure those foods that will contribute most to our feelings of fullness.

The calorie value is not an indicator of filling effect

The SI has proven that when comparing foods of equal calorie value they did not all behave the same. Potatoes were found to be three times more filling than a serving of pasta or rice. The SI has also rated whole grain breads twice as filling as white breads. Fish was found to be more satisfying per calorie than beef or chicken.

Foods rich in protein such as cheese, meat, eggs, fish and baked beans rated second to potatoes for feelings of fullness. This could relate to the fact that protein rich foods delay gastric emptying time for up to four hours. This helps to explain why an egg or baked beans on toast for breakfast will satisfy appetite longer than a slice of toast with jam on it.

Foods that have a higher moisture binding capacity such as cheese, porridge and potatoes increase the viscosity of the stomach contents and are very satisfying. The bulkiness of foods also helps explain why oranges score more highly on the SI than orange juice. Fruit and popcorn also scored much higher on the SI than jellybeans, crisps, ice cream, cake and cookies.

The Glycaemic Index was developed by Dr J Jenkins at the University of Toronto in 1980 and later researched by Dr Brand-Miller. This index is a scientifically based method of assessing and comparing the effects of carbohydrate rich foods on blood sugar. It compares foods of equal carbohydrate content and ranks them according to their glycaemic impact relative to that of a standard food (usually glucose or white bread).

The level of processing matters

GI rating is affected by food processing and the natural characteristics of the food and nutrient content (e.g. fibre, protein or fat content).

The presence of other nutrients alter GI

Carbohydrate foods that also contain protein and fat have a lower GI as seen in yoghurt and chocolate.

The speed of a person response to the GI of food can also be different from one person to another and also within the same person, from day-to-day, depending on their blood sugar levels, their insulin response etc

Research is now also focusing on the way in which varying the amounts of carbohydrate (the GI load) influences blood sugar control.

People who continually eat foods with a High GI such as biscuits, crackers, refined cereals and white bread often have difficulty losing weight because they are constantly hungry and therefore more likely to overeat than somebody consuming a diet containing more low GI foods.

New Zealand researcher Dr John Monro in 2002 measured the degree to which carbohydrate foods such as bread and cereals bulked up as they passed through the gut. He found that the more these foods bulked up the greater the sense of fullness and the better these foods were able to traverse the bowel.

As the foods absorb moisture they produce stools that are easier to pass. This helps to reduce the risk of bowel disease, constipation, diarrhoea and bowel cancer. Bulky foods also help to remove bile acids and salts which aid fat absorption, so they help to lower cholesterol and body weight too.

This interesting hypothesis has been put forward by researchers led by Stephen Simpson and Alison Gosby from Sydney University in 2011. They hypothesied that including enough protein in our diet was more important than the number of calories consumed in sustaining appetites and curbing the excessive intake of fat and carbohydrate.

The researchers concluded that reducing calories in order to lose weight but failing to meet daily protein targets will make it harder for those wishing to lose weight to resist hunger pangs.

The role of sleep and stress on appetite control

When people are tired they often notice an increase in appetite as they search for energy to compensate. Appetite control is managed by our hormones which also regulate body processes. There are some key hormones which are activated by stress and lack of sleep that affect food intake and weight gain.

This provides the fight or flight response to stress that historically takes us away from danger. High levels of cortisol over time increases abdominal fat along with our risk of developing coronary heart disease, diabetes and stroke.

This hormone increases our feelings of hunger. It also increases the more we become sleep deprived.

(Interestingly Ghrelin is also associated with growth hormone which explains why appetite increase as children grow).

This hormone increases our feelings of fullness. This hormone may be depressed in those who are overweight or suffering from diabetes.

So the cycle begins..we get upset so we eat more – abdominal fat gathers our sleep suffers.. we may feel hungrier..we gain more weight.  Interestingly people who have less abdominal fat to start with are less likely to gather it during times of stress than those people who already have a head start.

For more information read Lea’s articles: Is stress making you fat? and Sleep deprivation affects nutritional well-being and Are you a sneaky snacker?