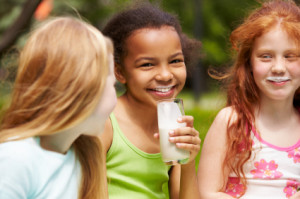 How safe is cow’s milk in the raw and homogenised state? When can cow’s milk be given to infants and how can we protect children against developing allergies to cow’s milk?

These are just some of the questions that have come up in the media lately and are in need of some clarification.

A market has grown recently in New Zealand for raw milk. This is best defined as a milk product, from a cow, goat sheep or other animals udder, which has not been heat-treated to kill bacteria.

Raw milk has missed the pathogen elimination step, which prevents bacteria passing from an infected udder into milk, or contamination from the farm environment e.g. faecal contaminants on the teats of cow’s crossing into the milk.

The  pro’s and con’s of raw milk production

However there is some concern that once broken down into smaller particles the fat combines with an enzyme Xanthine Oxidase (XO) allowing it to pass easily into the blood stream thereby increasing the risk of atherosclerosis and heart disease. In raw milk the XO is free-floating and harmlessly digested.

Currently in New Zealand whole cream milks such as Anchor (silver top) and ® (farmhouse) milks are not homogenised. When milk is manufactured it is the cream is separated out (leaving cream and skimmed milk) then standardised (cream put back according to the type of milk being made) then homogenised and finally pasteurised.

While research is continuing into the action of XO it is important to note that low-fat milks such as Trim® and Calci-Trim® milks have had much of their fat removed before they are homogenized and these are the milks that are recommended as part of a healthier diet for all New Zealanders over 5years of age.

The MOH in New Zealand recommend that care should be taken when drinking raw milk as it may contain harmful bacteria such as Salmonella, E coli 0157, campylobacter and Listeria Monocytogens.

The ministry recommend that groups at risk of illness such as children, the elderly, pregnant women or those with weakened immune systems should avoid raw milk.

Raw milk production is illegal in many countries including Australia and Canada. In the UK raw milk must carry warning labels.

A total of 55 cases of hospitalization have been linked with raw milk consumption in NZ nationwide over the past 2 years.

When can infants drink cow’s milk?

When the milk producer ‘Fonterra’ expressed concern in August this year that whey protein concentrate, identified as being supplied to Nutricia® (for infant formula production), might have been contaminated with the harmful bacteria Clostridium botulinum, many mothers of formula fed babies began looking for substitutes.

While this concern was later revoked talk back radio fielded many calls from people at the time who recommended old-fashioned remedies such as giving babies scalded cow’s milk.

A better alternative would have been to recommend that parents should look for an alternative brand of infant formula.

Cow’s milk is not recommended to children under 12months because:

By comparison breast milk changes to suit the infants needs as it grows:

For those unable to breast feed, infant formula now contains many of these nutrients. However it does not contain the human anti-bodies and lymphocytes that help to safe guard infants from life threatening diseases such as chest, ear and urinary infections and meningitis. Breast milk also minimises the risk of diarrhoea and protects the infant from allergic reactions such as eczema.

The MOH recommend the following milks for children:

Can cow’s milk allergy be prevented?

It was once believed that if mothers avoided an allergen during pregnancy and whilst breast-feeding (eg cow’s milk, egg, soy etc) it would help prevent their off spring from developing food allergy.

This is now considered incorrect and that later introduction of allergens found in cow’s milk, peanut, egg etc is associated with an increase rate of allergy to that food.

While general feeding guidelines recommend solids are introduced to children at 6mths, allergy prevention advice is that solids can be introduced from 4mths onwards, with no case for avoiding commonly allergenic foods.

If you have a strong family history of food allergy then discuss this with your GP or Paediatrician.

Testing for one type of food allergy( using skin prick or ssIgE) will often discover another. In one study around 40% of infants presenting with cow’s milk allergy had egg allergy.

Also for some allergens (e.g. egg and milk) total avoidance is not always necessary. Up to 75% of egg or cows milk allergenic children may tolerate this as an ingredient in well cooked foods (e.g. a baked product).

Some confusion does exist regarding food labelling. Particularly when the label may say that there a potential trace of an allergen. At present Dietitian’s are working with the MOH and manufacturers to help to align the food guidelines with what is in the product. .

Infants with cow’s milk allergy need an alternative for weaning or supplementation of breast-feeding. Goat’s milk is not a good substitute as there is extensive cross reactivity. Special authority funding is available for extensively hydrolysed formula (eHF) and amino acid formula (AAF) for infants meeting PHARMAC criteria, but need to be regularly re-evalulated as AAF is an expensive alternative. Many infants with cow’s milk allergy can tolerate soy.

Luckily most (80%) of children allergic to cow’s milk are able to tolerate it by the age of 5 years.

Milk is a valuable source of calcium, zinc and B group vitamins required throughout life. While some people do dislike the flavour of it and others may have allergies or intolerances to milk there are always alternative types of milks that can be tried.

Encouraging children to drink milk and water is a healthier alternative to consuming fruit juice and carbonated drinks.

What are our children drinking?
Drink milk for better health
Keep drinking milk