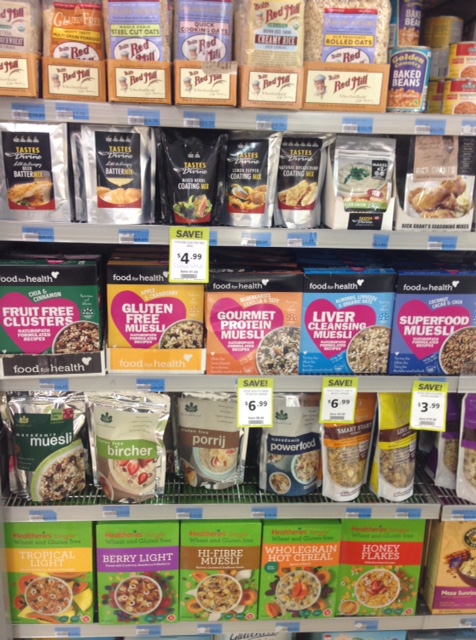 The production of Gluten free products is a world-wide billion dollar industry that is growing rapidly. 1

The positive side of this gluten-free (GF) movement is that it has increased the availability of GF products in supermarkets enabling those with Coeliac disease greater food choice. But as its popularity grows we need to question whether a GF diet is in fact a healthy option for any of us?

Is there a need for Gluten Free diets?

GF diets tend to be implemented for three main reasons:

The treatment of Coeliac Disease

It is estimated that 1% of adults worldwide suffer from Coeliac disease including around 10% of people with Type 1 Diabetes.2  This autoimmune disease, in the presence of gluten, causes inflammation in the lining of the small intestine, reducing the absorption of some essential nutrients e.g. folate, other B group vitamins, iron etc.

Gluten is a protein found in wheat (and related grains e.g. triticale, kamut and spelt) also rye and barley. To be defined as GF (in most countries) a food should have less than 20mg gluten /100g of solid food.

Symptoms of Coeliac disease may include diarrhoea, anaemia, bone pain and skin rash but because symptoms are so variable it is estimated that around 5-10% of cases go undiagnosed.2

A diagnosis to confirm Coeliac disease can be arranged by a doctor with a simple antibody blood test followed up by a biopsy while the complainant is still consuming gluten containing foods. If the presence of Coeliac disease is confirmed then eating a GF diet can help control the signs and symptoms of the disease and prevent complications. Care still needs to be taken however to ensure an adequate intake of energy and nutrients for good health.

This sensitivity, also linked to wheat and other wheat containing foods, may affect 0.5-6% of people. For some it may be the early stages of Coeliac disease.2 Symptoms can be similar to those affected by Irritable Bowel Syndrome e.g. abdominal pain, bloating and bowel habit abnormalities (diarrhoea and constipation) as well as non-gastric symptoms such as fatigue, muscle and joint pain, dermatitis, depression and anaemia.

Without biomarkers to confirm NCGS the level of incidence is hard to determine. Diagnosis depends on first excluding Coeliac disease and other autoimmune diseases and wheat allergy.
Sensitivity could also be due to:

For people not directly suffering from clinically proven gastric symptoms, a GF diet is often adopted in ‘the belief’ that it makes them feel better, is healthier and can help reduce weight.

In Australia and New Zealand GF foods are no more or less healthy than gluten containing foods according to a recent study of 3200 products that compared 10 food categories against the Healthy Star Rating System (HSR).5  This  is a nutrient profiling scheme endorsed by the Australian and New Zealand governments. (HSR:lowest score 0.5, optimal 5).The study looked at bread, breakfast cereal, dry pasta, cereal bars, cakes, sweets, biscuits, ice cream, crisps, processed meats and lollies.

GF dry pasta scored nearly 0.5 less compared to non GF. However no difference in HSR was found for bread or breakfast cereals. Relative to non GF, GF foods had lower levels of protein in particularly bread and pasta. The researchers commented that this would not be a problem if meat, eggs and diary were part of the diet however for vegans a lower protein intake from eating GF foods could be a problem.

In the USA a GF diet could lead to nutrient deficiencies because wheat flour in America is enriched with iron and folate. Folate is also added to wheat based bread, cereals, cornmeal, pasta and rice. Women of child-bearing age, the elderly and energy deficient need to take particular care to ensure adequacy of nutrient intake. 1
The researchers also commented that a large number of discretionary products that do not contain gluten e.g. processed meats, corn and crisps now carry GF labels. This raised the possibility that food manufacturers may be employing gluten-free labelling as a tool to market discretionary food items posing a clear risk that consumers, could misconstrue the GF status as indicative of healthiness. 5

Cost is also an important factor when considering the healthfulness of a diet and access to nutrients. Supermarkets chains in Australia (e.g. Woolworths® and Coles®) with large sales volumes can achieve economies of scale which help to keep prices down for staple foods. This is generally not the case for GF foods which, although growing in popularity, are still supplied by mostly smaller producers with tighter profit margins. There are thus fewer supermarket discounts which keeps the cost of GF foods high 5
To put this to the test in New Zealand the author selected randomly a group of 10 GF foods in a Supervalue® supermarket and they were found to be on average 40.2% more expensive than non-GF foods and 25% lighter in average weight 6

One reason why people might lose weight on a GF diet is that they read labels more often and may become more mindful of their carbohydrate intake than non GF consumers. The carbohydrate found in GF bread is still carbohydrate and GF cookies can contain just as much saturated fat, sugar and kilocalories as non-GF.

The principal concern with GF baking is the lack of bulk and dietary fibre. Gluten is a sticky component which traps gas released from yeast and raising agents as doughs are proofed (rested) and then baked. GF products often have a finer crumb and less volume. Additives are sometimes used to compensate for this e.g. cornstarch, egg, xanthan gum, guar gum and hydroxyl propyl methyl cellulose.

Wholegrains such as wheat, rye, rice, oats and barley help to reduce cholesterol and the incidence of coronary heart disease, Type 2 diabetes and cancer etc. Around 48g of dietary fibre a day is associated with a reduction in body mass and body fat. Wholegrains also have a lower energy density (i.e. kilocalories/unit weight) and they contain more non- digestible carbohydrate compared to refined foods.

These factors increase feelings of satiety and fullness, slow digestion and insulin response, thereby aiding weight loss.7 Wholegrains also promote the growth of gut bacteria that are associated with improved immunity and weight loss. 8
Therefore if embarking on a GF diet it is important to make use of the pseudocereals  e.g. amaranth, quinoa and buckwheat as these are thought to contain good sources of protein, fat, fibre and minerals important for good health and weight management. 9

The use of GF diets by non-coeliac athletes is also growing in sporting communities. A recent Australian study of 910 athletes (including 17 World/Olympic medalists) found that 41% were GF for at least half of the time. 4 Reasons that were given for adherence were similar to the general population e.g. reduces gastrointestinal (GI) distress, reduces inflammation,  aids weight loss, is healthier and enhances their athletic performance.

To counteract the lack of scientific evidence regarding the efficacy of GF diets for NCGS athletes a tightly controlled, double-blind cross over study was undertaken to test the efficacy of using a GF diet on non-coeliac endurance athletes, a group of competitive cyclists.

After 7 days of a GF diet followed by a 10 day wash out period and 7 days gluten containing diet the researchers found no beneficial or negative effect on cycling performance, GI health, systematic inflammation or overall wellbeing in non-coeliac athletes 10

While it would be interesting to see the results over a longer time frame the researchers suggested that any benefit felt from a GF diet may be due to consuming less refined carbohydrates in favour of more fruits and vegetables rather than to the removal of gluten itself.

However the researchers also commented on the importance of the ‘belief effect’. Halson and colleagues have shown that the belief in an intervention can improve performance by 1-3% 11 highlighting the importance of considering that belief itself may affect the outcome of a dietary intervention.

One of the main problems associated with self- prescribing GF diets is that not only can it lead to nutrient deficiencies but also fail to detect medical reasons for GI issues. 2,10

Also anxiety is a key factor associated with following a GF diet, particularly for Coeliac’s  themselves. A German study of 441 adults with Coeliac disease compared with matched controls found the prevalence of anxiety disorder in persons with Coeliac disease (16.8%) Irritable Bowel Syndrome (14%) was higher than the general population (5.7%). The researchers commented that female Coeliac’s in particular should be screened for anxiety by their doctors 12

Although most restaurants, cafe’s and supermarkets now offer Coeliac people greater food choice this is not necessarily a healthy choice as it is reliant on the nutrition education, vigilance and sincerity of food handlers.

Eating out is something many Coeliac are anxious about. A survey of NZ Coeliac society members has found that 36% of respondents avoided travelling and 26% never or rarely ate out because of a fear of cross contamination. It seems they have a right to be concerned.  A survey of 90 chefs in Dunedin during the summer of 2012/13 found it was not safe for coeliac’s to dine in 75% of restaurants offering GF foods. 13

This concern for cross contamination is one of the main reasons that coeliac’s often avoid oats as it can be contaminated with wheat during the growing and processing stages of production. For this reason most doctors and Dietitians generally recommend avoiding oats unless specifically labelled GF.

Humans require key nutrients every day for good health and fitness. However these needs change during times of illness, as we grow, exercise, have families, age etc. Contact us if you would like help to assess your diet now.