Who controls feeding – the mother or the child? 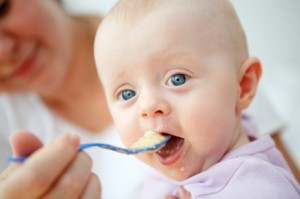 Should a mother take control over her baby’s feeding schedule and the amounts that she feeds or leave it to her baby to indicate its need and when it has had enough?

Research in this field has been gathering momentum in an attempt to find a way to curb childhood obesity and obesity in later life.

Research has shown that breast-feeding may offer some protection to the development of obesity in later life and is considered to be the best first mode of feeding an infant. In New Zealand the baby friendly hospital initiative reviewed breast-feeding targets to aim for infants to be exclusively and fully breastfed to: 74% at 6 weeks, 57% to 3 months and 27% at 6 months which is not far short of reported rates in 2010 of 66% breastfeeding a birth, 55% at 3 months and 25% at 6 months

Breast milk or breast milk substitute is the most important nutrient source for the first year of an infant’s life and is the first control decision that a mother makes for her baby.

Mothers who choose to bottle feed their baby usually do so after much thought.

Some of the reasons for bottle feeding:

Irrespective of the feeding method mothers choose it is interesting to note that they may also exhibit their control over feeding in a number of other ways:

For most infants, complementary foods should be introduced by the time they are 6 months of age. While some infants may be ready to feed earlier complementary foods should not be given before 4 months of age as this is more in line with their physical development e.g. being able to hold their head up well, sit up, open their mouth when a spoon touches their lip and also when their tongue does not protrude.

Compared to the spoon fed group, the baby-led group demonstrated:

The researchers concluded that infants weaned through baby-led approach learn to regulate their food intake in a manner that leads to a lower BMI and a preference for healthier foods like carbohydrates (bread, cereals, fruits and vegetables) which may lead onto reduced obesity in later life.

Mothers who do spoon feed their baby’s need to be aware of the research on interpreting the reactions to taste sensations that infants may exhibit.

It is perfectly normal for a baby to lean forward and appear interested when offered sweet and salty foods and to recoil when offered foods that are sour or bitter. This recoil is an uncontrollable reflex or ‘shock factor’ when a child first encounters these tastes sensations and should not be interpreted as a baby not liking sour or bitter.

While pre-testing weaning food to check it’s temperature  is not too hot or too cold is important before feeding mothers are encouraged not to add sugar or salt to weaning foods to suit their own taste preferences. Adding sugar can just lead onto dental carries and encourage a preference for sweet foods. Adding salt is discouraged because a baby’s  kidneys are immature and unused to handling a higher salt load that can put stress on their fluid balance.

Allowing for messy eating and ‘play’ with foods encourages baby control over feeding and enables them to develop good hand and eye co-ordination.

Barker looked at the health records of 60 year olds in the UK and found many who had died from heart disease, diabetes, etc. were small at birth or SGA (small for gestational age). He hypothesised that a foetus develops and adapts to under nutrition in the womb e.g. by developing smaller vital organs such as heart and pancreas with less insulin production etc. So that following birth the infant becomes overwhelmed by an abundance of nutrition and it is this rapid weight gain that increases disease risk in later life.

Studies of SGA individuals have found that they are at an increased risk of rapid postnatal weight gain, later obesity and diseases in adulthood such as Type-2 Diabetes, hypertension and cardiovascular disease. Environmental risk factors during pregnancy include smoking, low pregnancy weight, maternal short stature, maternal diet, ethnic origin of mother and hypertension can contribute to the problem.

However, in a large proportion of SGA where no underlying cause is obvious, then these individuals may have a larger genetic predisposition to later health problems. Research is now focusing on isolating the genes that in SGA appear to have the greatest effect on long-term health.

Evidence of the effects of environmental factors on the health and diet of children can be seen in a 2009 study of Tongan children that migrated to New Zealand. While migration resulted in increased height and reduced stunting of infants and toddlers, older children (3-5 year olds) experienced increases in their body mass index (BMI) and obesity.

What can parents do to breed healthier adults

If you would like to discuss you or your families dietary needs then contact us for an online appointment.

Update July 2017 For more information on this subject

Update July 2021 Baby Lead Weaning what role does it play in obesity risk?

The first 1000 days of life (i.e conception to a child’s second birthday) is considered to be a period of extreme vulnerability for growth and development.

Currently there is still insufficient evidence to recommend one method of feeding over another.In separate research, Pinho-Gomes et al (2021) found that for women who have developed gestational diabetes during pregnancy, breastfeeding was associated with a reduced risk of Type 2 Diabetes by almost one third. There are many possible reasons for this, including the effect of breastfeeding on reducing maternal weight.