The effects of early alcohol exposure on children 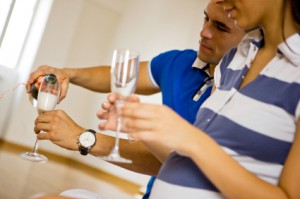 The human brain functions rather like a computer and the age at which a child is exposed to alcohol affects the ‘hardware’ (structure and size) and ‘software’ (processing ability) of this vital organ.

The effects of alcohol on infants

When a pregnant woman drinks during the early first trimester of her pregnancy infant growth is affected and there is an increased risk her infant will be born below the 10th percentile for length and head circumference and the child will be more difficult to feed.
Drinking during the second and third trimester produces infants who at eight months have lower weights, lengths and head circumferences than children not exposed to alcohol.

The most severe consequences for the infant when alcohol is consumed by its mother during pregnancy is Foetal Alcohol syndrome (FAS). Along side growth deficits the FAS child may sustain mild to moderated mental retardation with serious attention and behavioural problems), central nervous system problems, facial or cranial abnormalities such as; small head size, small eyes and/or short eye openings, under development of the upper lip with flat upper lip ridges, thin upper lip and flat maxillary jaw area. These children may also suffer from immune insufficiency.

Newborns exposed to alcohol before birth can be difficult to feed and may have a weak sucking response and irregular sucking patterns early in life. Some describe them as easily distracted and fatigued when sucking.

Sleep disturbance, and jitteriness have also been reported. While physical abnormality affecting the mouth and sucking reflex can compromise and infants nutritional status.

Major damage can also occur to the appetite centres directly when alcohol is introduced during the first trimester when the embryonic development of the appetite and satiety centres is taking place in the central nervous system.
In separate studies poor appetite and growth retardation and has been found to persist in studies of 6-year-old children with failure to thrive and no evidence of catch-up growth.

Alongside the ill effects on growth rates, early introduction to alcohol also affects intellectual and behavioural functions into adolescence. Tests of intellectual functions such as sustained attention, focused attention; executive function and working memory have been shown to persist at age 14 years.

Regarding behaviour, one study of 14 year olds found children with higher levels of prenatal alcohol exposure were more likely to have negative feelings about themselves, to be aggressive and delinquent and to use alcohol, tobacco and other drugs

As the majority of women are not aware that they are pregnant for the first 4-6 weeks of their pregnancy it is advice able for women who are wanting to start a family to stop alcohol consumption altogether.

When breastfeeding woman choose to drink the alcohol diffuses into their breast milk and reaches concentrations similar to maternal blood within 30-60 minutes of consumption. Studies of breast-fed infants at one year have found that they score more poorly on tests of motor development.

When alcohol is introduced to healthy children at an older age, as with adults, there can also be nutritional implications as alcohol effects energy systems, body weight, functional and mental performance One of the most concerning aspects of alcohol consumption for parents is the associated risk taking behaviours of young people such as drink-driving, sky-larking behaviour (such as swimming or diving while intoxicated), unprotected sex and, again, possible exposure to illegal drugs.

When an individual decides to drink alcohol the effects can impact negatively on not only themselves but family and friends.

If you would like to measure your alcohol intake, discuss its effect on your total nutrient intake and how to make changes then contact Lea today.