Tips to help you ‘shake off’ the salt habit 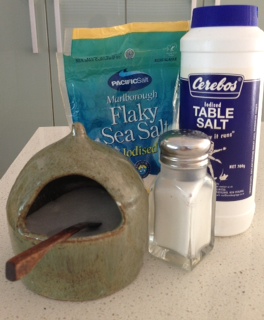 Salt is made up of sodium and chloride and we need some each day to help maintain our fluid balance. But are we now eating too much?

For centuries countries in the ancient world traded in salt and it was highly valued as a food preservative. Over time other methods of food preservation have taken over this function however we still retain our liking for salt as a flavouring agent.

With our busy modern lives many families are turning to the use of ready-made convenience foods, takeaways and snack foods to have on the run. However these foods are much saltier than foods freshly made and concern is growing that our increasing salt intake may be detrimental to our health and particularly that of our children’s.

How much salt do we need?

Initially sodium is found in breast milk and formula but as solid foods are introduced our tolerance and needs for sodium increase. This is why it is important not to rush the introduction of solid foods for infants and to be careful of the snacks they are given because their kidneys are still growing and adapting to a higher concentration (solute load) of fluids passing through their gastrointestinal system.

What about those with greater sodium needs?

As children develop they need more sodium. By the time they reach puberty they have begun to lose sodium through sweat losses but this is normally made up for with the extra food they consume.

Athletes or heavy labourers or those working in very hot climatic conditions do lose sodium through sweating. Sodium’s function  is to control the amount of water inside body cells and the spaces between them. During intense exercise, water is lost through the sweating mechanism, therefore increasing the concentration of sodium in body fluids. This increased concentration causes water to be drawn out of cells and into spaces between. Water is, however, required by the cells for energy production so any extra salt ingested can impair performance further and/or induce nausea and vomiting.

Salt tablets are not necessary for sports people as once fluid losses are restored any salt losses will be replaced from the natural salt in food eaten. Another factor to consider is that because athletes consume large volumes of food to fuel their greater energy expenditure they naturally also consume a higher intake of sodium.

What happens if we have too much sodium?

Consuming too much sodium increases the risk of developing high blood pressure (hypertension). Hypertension increases the risk of heart disease, stroke and kidney disease. Too much sodium can also affect our bone health. Strong healthy bones require sufficient calcium each day. An excess of sodium in the diet can interfere with calcium absorption.  Those at risk of osteoporosis or those trying to build bone, such as children or fracture victims should avoid eating too much salt.

Adding salt is a habit

Most people automatically sprinkle salt on their food without tasting it first. To break this habit it can help if you avoid putting salt cellars on the table.

If salt is being added then the most important message is to make sure that you buy iodised salt if living in New Zealand. Salt flakes are now also available in an iodised form. Iodine is an essential component of our thyroid hormones which are required for normal metabolic growth and mental development. Most soils in New Zealand are iodine deficient along with our local produce.

The primary source of iodine in New Zealand in recent years has been through iodised salt consumption although other sources are present (low-fat milk and milk products, eggs, fish and seafood). With the recommendation to reduce salt consumption the intake of iodine has also declined. So all bread made commercially in NZ (except for organic and unleavened bread) must now be made using iodised salt.

With the current drive to reduce the intake of processed foods many food manufacturers are modifying their products to meet new food guidelines. However how much you consume does come down to “buyer beware”. So if you are concerned about monitoring your salt intake then it pays to understand regulations regarding salt categories and to read food labels.

‘No added salt’ now means just that i.e no salt has been added.

Many foods contain high levels of salt e.g. baked beans and tomato-based products such as tomato sauce and pasta sauces. So where appropriate choose products with a “no added salt” label. Be aware too that some sodium compounds are disguised in the food ingredient listing (bicarbonate of soda, baking powder, monosodium glutamate and sodium sulphate).

Many people are unaware that foods do contain salt naturally, and often to quite high levels e.g. cheese, meat and bread.  So when they include snacks that are also very high in salt or use canned or reconstitute dried packet foods such as noodles regularly, their total salt consumption can be excessive.

Limit the use of high-salt foods

Are you keen to learn more?

Busting some of the myths regarding the use of salt may help you to rethink your current intake.

Contact us if you would like to have a nutritional assessment of your current salt intake or that of a family member. We would be happy to help you.