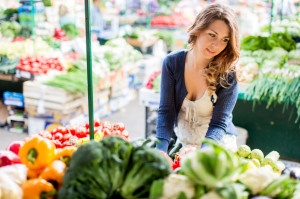 The Organic food market is gaining popularity in New Zealand.

The development of the Organic food sector has helped local farmers to add value to their produce. Valued at NZ$70mill in 2002 NZ export sales of organic foods have grown to NZ$250mill in 2013. Export markets include Europe, USA, Australia, Japan, South Korea, Taiwan, China and South-east Asia.1

Although supermarkets sell some organic produce their range is limited however, many main cities around New Zealand now have organic food markets or co-operatives. Organic foods can also be purchased online.  Warehouses that stock local and imported organic foods exhibit how varied this “market sector” has become.

Here you will find not only fresh fruit, vegetables, organically raised beef, pork, chicken, eggs, cheese, milk and yoghurt but also grains, cereals, baby foods, confectionery, ice-cream and ice blocks and baked goods. Many of these markets are also catering for customers wanting gluten, lactose and dairy free products and to support the “organic environment” you can also find household items such as soap, shampoos and laundry powders and even potting mix.

What does it take to be “organic”

The word “organic” is not protected by specific legislation although the Fair trading act does offer consumer protection from misleading behaviour of those selling organic foods.

“Organic” is often a term used to describe qualities that are natural, authentic and pure in everything from fabric, cosmetics, building materials, carpet, through to the way business is conducted, law is applied and even music is played.

When it comes to food, protecting its clean, natural image is important to New Zealand organic food producers.

Internationally NZ ‘s organic environment is seen to be ‘nuclear free’and ‘genetically modified free’. Also being geographically isolated has helped NZ farmers to avoid many pests and diseases that are common elsewhere.

To maintain an image of safety, quality and natural goodness for organic foods and beverages there are now several bodies assisting growers.

As with all foods, if you are able to shop around, it is possible to find cheaper organic foods if you are prepared to visit organic farms and farmers markets and if you are careful to buy foods in season.

Organic foods are more expensive because of the intensive farming practices they employ. From overseas experience it appears that as more farms convert to organic food production the costs do come down and the savings to the environment by reducing pollution and conserving water and soil quality may, in the long-term, be money well spent

The public perception of organic foods, which is also promoted by the industry, is that organic food is safer, more nutritious and tastes better than conventionally grown food.

Certainly the perception of goodness has influenced the Chinese market for organic infant formula which since the 2008 Chinese Milk Scandal has seen the organic milk sales become the greatest in the world for 2014. 4

The perception of goodness is not without it’s hazards, as a study by Schuldt and Schwarz found out when they questioned 114 university student’s about their“thinking about food”.
When looking at the student’s perception of organic foods the researchers found that these foods were subject to a “halo effect” where students widely considered them to be lower in calorie and a “health food”. When students were asked to recommend a cookie and  were told that the organic cookies contained the same number of calories as the non-organic variety, the students still recommended a greater consumption of the organic one’s, because they perceived the cookies as being “good for them”.  The researchers warned that such thinking could lead to the over consumption of calories and an increased risk of obesity.5

When buying organic foods it is important to watch the weight of goods. Often these foods (particularly green vegetables) are bundled up and sold at a price that seems comparative  to non-organic varieties. On closer examination you may find that the bundle of the organic food weighs less than the non-organic alternative.

Are organic foods a healthier choice?

Studies seeking to compare the nutrient differences between organically grown and conventional methods of farming have proven difficult due to differences in testing methodology as well as variables in things such as climate, location, soil type and methods of animal husbandry.

Many of these compounds have previously been linked to a reduced risk of cardiovascular and neurodegenerative diseases. 6

A 2012 survey of the scientific literature, failed to find any significant differences in the vitamin content of organic and conventional plant or animal products 7,8

Conventional growers spray their crops with synthetic pesticides to protect crops from mould, insects and disease. Some of these residues can remain on the produce. Organic farmers use insect traps, disease resistant varieties, predator insects or beneficial micro organisms to control crop damaging pests.

A 2014 meta-analysis found that conventionally grown produce was four times more likely to have pesticide residue than organically grown crops.6

However residues on most foods organic or non organic don’t exceed the government safety threshold.

In NZ the Ministry of Primary Industries (MPI) surveys foods under the Food Residues Surveillance Programme (FRSP). This service monitors pesticide residue and chemical contaminants in NZ produced and imported foods to ensure their safety.This data is publicly available. 9

The American and The NZ Cancer Societies have both stated that no evidence exists that the small amount of pesticide residue found on foods will increase the risk of cancer, though they recommend thoroughly washing fruits and vegetables. They have also stated that there is no research to show that organic food reduces cancer risk compared to foods grown with conventional farming methods 10

Studies in the Netherlands have reported the consumption of organic dairy products was associated with lower eczema risk, but there was no association of organic meat, fruit, vegetable or egg or the proportion of organic produce within the total diet with the development of eczema, wheeze or atopic sensitisation. Further studies are warranted.11

Here are some tips to help your food selection:

If you would like help to improve the nutritional quality of your diet then contact us today.