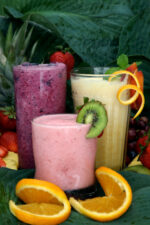 Are you searching for new drink ideas? If so you’re not on your own. As concern, regarding the sugar and energy content of carbonated drinks and fruit juice, gathers momentum many people are looking for alternative drinks to have.

These seem to tick all the boxes for modern-day life:

These things hold some truth and for most people a glass of juice each day as part of a healthy diet will do no harm. However there may be some factors about juicing that are worth considering particularly if using juice as a meal replacement.

If you are taking juice regularly, if could be robbing your gastric system of work, exercise and protection.

Kale is a very healthy green vegetable that contains protein so is useful to vegans and vegetarians. It also contains Vitamins A, C and K along with folate and calcium. While Kale can be eaten steamed or boiled do take care if juicing it. Vitamin A is a fat soluble vitamin which is stored in the liver and can be toxic if taken in excessive amounts. Women who are pregnant should exercise care.1

Vitamin K also present in Kale is important for blood clotting. Therefore people taking anticoagulant (blood thinning) medication such as Warfarin should take their kale as a solid vegetable rather than as a concentrated juice which could interact unfavourably with this drug.2

Carrots are low in energy but contain a moderate amount of Vitamin C, potassium and dietary fibre.They also contain ∞ carotene and β carotene which are converted to Vitamin A in the body.The bright carotene pigment gives carrots their distinctive orange appearance. If taken in excess regularly this carotene can lead to a person’s skin taking on a slightly orange discolouration. 2

Beetroot juice is capturing the interest of sport scientists.  While it contains dietary fibre, potassium folate and other B group vitamins, Beetroot (as well as some green vegetables such as celery, lettuce, rocket and spinach), also contains nitrates. The amount of nitrates in vegetables is determined by such things as freshness and farming practice’s during harvesting. Fresh vegetables grown with nitrogen containing fertiliser will yield higher levels of nitrates, so organically grown vegetables may have lower levels.3

Nitrates can be converted, by oral bacteria and during digestion in the stomach, into nitric oxide which acts as a neurotransmitter (signalling molecule) for a range of different body processes.

For instance nitric oxide can act as a vasodilator, increasing blood flow; it can regulate muscle contraction and glucose uptake and also regulate cellular respiration. These benefits can improve exercise efficiency by theoretically allowing an individual to exercise at a greater intensity for the same level of effort.3

One study by Larsen (2007) using up to 300mg of nitrate (equivalent to eating 250g nitrate-rich vegetables such as rocket, lettuce, spinach, bok choy and broccoli) reduced VO2 during submaximal exercise improving cycling efficiency by approximately 1.4% 4 This may not sound like a large effect but in sport >1% improvement in performance can make the difference between winning and losing a race.

Studies have since looked at the timing intervals to achieve results. Studies by Bailey (2009) using doses of 500ml doses of beetroot juice per day for 6 days observed a reduction in oxygen use by 19% at moderate workloads and approximately 16% improvement in cycling exercise to exhaustion. 5

Since then other studies, using shorter time frames of intervention, by Lansley (2011) have reported improvements of around 3% in cycling performance when beetroot juice was administered just 2.5hours before exercise.6

As with all competition strategies these drinks must be trialled during training sessions to study the effect on an individual’s performance before implementing them for important events.

The use of nitric oxide appears to be most marked in endurance sports with work still needing to be done on its usefulness to team and power sports. Issues such as dosage, tolerances and side effects have yet to be decided. 3

Beetroot juice can cause gastrointestinal discomfort. It can also cause pink discolouration of urine and stools which is harmless and temporary. As there is limited evidence, as to the risks associated with higher levels of nitrate intake, care must be taken when supplementing with doses greater than would be normally consumed through food. For this reason nitrite supplementation should be avoided.3

Milk continues to be recommended by Dietitians to replace carbonated drinks and juice. There is now a wide range of milks available to those who may dislike the taste or are intolerant to dairy milks. Making a fruit smoothie after school or work and taking a warm milk drink prior to bedtime can greatly improve protein and calcium intake important for growth and body repair and may also improve sleep.

Tea and coffee remain popular drinks and research now shows both to be less dehydrating than formerly thought 7
Coffee consumption may protect against colorectal cancer. Green tea may protect against cancer of the stomach, colon and rectum, breast and ovary and black tea against prostate cancer.
Research involving green tea has noted it contains polyphenols and flavanols which have an anti-oxidant effect and regular intake is associated with a reduced risk of stroke and coronary heart disease and lower levels of LDL cholesterol (but no effect on HDL)8

The main benefit of caffeine comes from its effects on the central nervous system as it reduces the perception of effort and fatigue. Previous beliefs that caffeine increased fat use during exercise and spared glycogen are now considered unlikely to be the main pathway of performance enhancement 9

Coconut waters are now being marketed as a natural energy sports drink with a high potassium and mineral content, low in fat, carbohydrate and calories. While these drinks may be a welcome change from drinking water their use as a sports drink is limited because they are lower in energy and sodium than other sports drinks, ingredients essential to athletes with high sweat losses and increased energy needs.

There is nothing cheaper and healthier than water from the tap. All that we need to do is find ways to drink it.  If plain cold water with a block or two of ice is not exciting enough in warmer months then here are a few ideas to experiment with:

For more of Leas articles on related topics see:
What are our children drinking?
Juice diets -are they as healthy as they sound?
Boosting fibre intakes offers health benefits
Drink milk for better health
Can caffeine fix performance?
Can coconut improve our health?