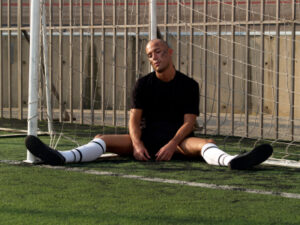 Although athletes may benefit from an exhilarating endorphin rush on exertion that elevates their mood and suppresses feelings of pain it will not stop them from experiencing, at times, anxiety and bouts of depression just like the rest of us.

Depression is a mental health issue that Wikipedia defines as “a low mood and aversion to activity that can affect a person’s thoughts, behaviours, feeling and sense of well- being. Depressed mood is not necessarily a psychiatric disorder. It can be a normal reaction to certain life events, a symptom of a medical condition or a side effect of drugs or medical treatment ”

There are many dietary factors that can speed recovery if time is first taken to understand the origins of the depression, recognise those most at risk from it and the treatment options that are available.

Generally mental health issues are more common than you might think.

Athletes may be particularly at risk of mental health issues because of the nature of their sport:

Depression can take many forms, but in the early stages the sufferer may notice:

Athletes, like the rest of us, may also become depressed by life itself.

Research is focusing on identifying genes for depression that may be passed on from one generation to the next. One explanation is that if the genetic capacity for stress is low there is a greater risk of depression developing.

Research is looking at the way in which mood is affected by electrical activity and certain chemicals within the brain. It is thought that high levels of stress may lead to chemical imbalance which can in turn lower the functions and effectiveness of some brain activities and lead to mood imbalance. The effects of the over use of caffeine and alcohol on mood and behaviour are just some example where tolerance to chemicals can vary. For more information refer to Lea’s articles “Alcohol and Sport” and “Can caffeine fix performance”?

Depression can accompany physical illness, such as following chronic fatigue syndrome, glandular fever, thyroid and liver disease. Research has found, for instance, that being diabetic doubles the odds of having depression. Severe vitamin and mineral deficiencies e.g. iron deficiency, along with sensitivity to low levels of sunlight (seasonal affective disorder) have all been found to contribute to depressive states.

Concern regarding weight control is of particular relevance to athletes. Especially when individuals are trying to “make-weight” for selection or the success of the team is reliant on a weight category such as in rowing, rugby, equestrian or gymnastics. Anxiety and depression can certainly result if goals are not realized.

It is very common for people to experience high levels of anxiety in the early stages of depression. Feelings may include unrealistic worrying, panic, fear, sleeplessness, irritability and excessive tiredness.

Studies have found that anxiety levels in athletes can be reduced and performance during competition enhanced, when athletes learn how to improve and maintain their levels of self-confidence.

Psychological theories of depression tend to look to the sufferers early experiences and again genetic reasons.  Personality traits particularly an individual’s ability to cope with change and tolerance to stress may lead some people to react more negatively than others when responding to life events. This has led researchers like Martin Seligman to define this as a state of” learned helplessness” where the sufferer begins to believe that nothing they can do will alter the situation they are in. Motivation to change their circumstances is lost and depression can set in.

Stressful life events or sudden change such as divorce, bereavement, financial loss, unemployment or loss of status along with conflict within families and social groups, can all lead to feelings of isolation and depression.

Little wonder then that athletes coping with normal family stresses might experience additional stress if faced with non-selection, injury, or a drop in form.

Who is most susceptible?

Depression can occur at any stage of an athlete’s life.

This was published by the American Psychological Association is the most widely used diagnostic manual in USA and many other countries. This manual helps to classify specific disease categories according to the number of symptoms exhibited. This “one size fits all” approach has led some critics to argue that the system fails to take into account the “degree of distress” being experienced, however it does provide a diagnostic tool and baseline from which to work.

Also with regard to depression, critics are concerned that the DSM has led to a “medicalization” of quite understandable expressions of sadness  that may occur  normally off and on throughout people’s lives. The increasing use of antidepressants and prescription rates in New Zealand has raised concerns that depression, like obesity, may be reaching epidemic levels. (Which is not surprising since they can be related). However it may also indicate that more people who once would have “slipped through the net” of the health system are now being picked up and offered help.

There are a number of avenues of nutritional assessment worth considering when working through mental health issues.

The majority of depression sufferer’s site fatigue as one of their greatest problems and this could be due to the following:

Depressed athletes often complain of being unable to concentrate and remember things. This can be due to nutritional deficiency.

Depression often accompanies changes in body weight that can occur when athletes are injured, side lined or touring away from home. For more information read Lea’s article “Facing the down times without weight gain”

Depression often accompanies other addictive behaviours such as excessive dieting, cigarette smoking and substance abuse that alone or in combination can impact on some of these nutrients mentioned above as well as eating behaviour.

For instance there is a high correlation with depression and heavy smoking. Smokers have been found to experience greater weight loss, skip meals, eat fattier foods, drink more coffee and alcohol and have lower intakes of folate, iron and anti oxidant vitamins C and E than non-smokers. While it maybe an unhealthy habit, enough athletes smoke to warrant a “smoking zone” to be included in the London Olympics game village.

According to research from Tuffs University  a study of 10,094 people studied at the University of Navarra found that 42% of those who ate a predominately Mediterranean diet were less likely to suffer from depression. This diet was characterised by moderated intakes of alcohol and dairy products, low intakes of meat, increased consumption of legumes, nuts, fruits and vegetables, cereals and fish.

The B group vitamins folate, thiamine and vitamin B6 present in these foods are important to healthy serotonin levels since the body uses these nutrients to convert tryptophan to serotonin. Serotonin levels also increase with exercise and exposure to sunlight.

Many people with mental disorders see the problem as “fixing itself”. The most common reason for not seeking support or stopping treatment was the attitude “I thought the problem would get better by itself” This is not so.

New resources on depression that might be of help:
Depression and anxiety affects us all differently
Well being and mental distress in Aotearoa NZ: Snapshot 2016
How to help athletes recognise the mental health risks of sport

Smith G. Depression Explained. How you can help when someone you love is depressed.Cox and Dawes 2002