Can coconut improve our health? 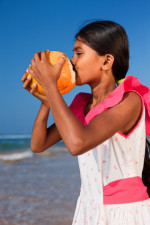 Coconut oil was once associated with tanning. Something young people coated themselves with before lying out in the sun “to bake”

Although we are more “sun smart” these days, coconut oil and coconut products are being heralded by many as the new “wonder foods” that can:

So is this true? Can this tropical plant live up to these claims?
At present there is a lack of good evidenced based research surrounding many of these claims but let’s take a look at what we know so far.

A Coconut is the fruit from the coconut palm tree Cocos nucifera and is not a nut but a drupe. Unlike other fruits coconuts contains a large quantity of water when they are immature and can be harvested early for drinking. When mature, coconuts have less water and can be harvested and used as seed nuts or processed to give oil from the kernel; charcoal from the hard shell and coir from the fibrous husk, which is used for making floor mats and brushes. The edible flesh lining the coconut inner shell copra can be eaten raw or dried and the milk and oil can be used in cooking.1  The oil can also be used for the making of soap, fragrances and moisturizers.

Around 75-80% of coconut is composed of the following saturated fatty acids:

The numbers in brackets represents the number of carbon atoms in the fatty acid chain.

MCT is absorbed into the portal circulation and transported to the liver for oxidation. So MCT’s do not participate in the synthesis and transport of cholesterol. 2

This is quite different to LCT’s which are transported via chylomicrons into the lymphatic system allowing the uptake of fat into adipose tissue. 2

Virgin coconut oil has a greater concentration of MCT (70-85%) than refined coconut oil. Because of its high saturated fat content coconut oil is slow to oxidize and is therefore resistant to rancidification and may last for up to two years without spoiling.

This is a popular drink in tropical countries and India, Brazilian coast, Southeast Asia and the Pacific Islands.
Coconut waters are now being marketed as a natural energy sports drink with a high potassium and mineral content, low in fat, carbohydrate and calories.While these drinks may be a welcome change from drinking water their use as a sports drink is limited because they are lower in energy and sodium than other sports drinks, ingredients essential to athletes with high sweat losses and increased energy needs.

The additional potassium in coconut water is not as important as the sodium for sport and in fact in excess potassium can affect heart function.

The health benefits of coconut

Irish researchers have discovered that coconut oil has an enzyme similar to that found in the digestive tract. This enzyme is effective in blocking the development of most strains of streptococcus bacteria including streptococcus mutans which are the major cause of tooth decay. Studies are continuing. 3

Butter v’s coconut oil and safflower oil.  When these fats were fed to 28 hypercholesterolemic men and women over a period of 6 weeks and results compared the TC, LDL-C were significantly higher from butter compared to coconut oil, however the lowest cholesterol levels were found using the safflower oil. 5

Coconut oil v’s olive oil and palm olein were evaluated in a study involving 45 healthy Malaysian adults. Each fat studied contributed 20% of the energy from fat in the Malaysian diet (consisting of 30% calories from fat,20% calories from protein and 50% calories from carbohydrate). It was found that the fasting TC, LDL-C and HDL-C were all higher (5-7%) on the coconut oil diet than the olive oil, but were comparable to the effects observed on the palm olein diet.6

One of the researchers Dr Nigel Turner explains that “unlike LCT fatty acids in animal fats , MCT fatty acids are small enough to enter the mitochondria – the cells energy burning powerhouse-where they are converted into energy, The downside is however that MCT’s can lead to a build-up of fat in the liver and important consideration for anyone considering them as a weight loss therapy”.
Dr Turner suggested that “fish oil maybe a better choice because the omega 3 polyunsaturated fats it contains improve fat oxidation in the liver”. 8

There can be no doubt that research surrounding the use of coconut is advancing and with open minds we need to ‘watch this space with interest’.

Highly inaccurate and exaggerated positive articles on coconut oil claiming numerous health benefits continue to appear in the non-peer reviewed literature. The articles still maintain the erroneous statement that coconut oil is like MCT oil in its make-up. A recent article published by researchers at the University of Auckland (2016) used MCT oil as a placebo when studying the beneficial effects of long chain omega-3. MCT oil was in fact not neutral but had negative effects on lipid profiles.9

Their conclusions are listed below:

MCT oil was not neutral in its effect on blood lipid biomarkers. The results were surprising and unexpected and have raised serious questions for the claims made about the nutritional properties of MCT oils, and the spurious connection with high lauric oils currently being used by some marketers to promote coconut oil and its products.10

If you would like a nutritional analysis of the amount and types of fats in your diet now in order to lose weight, control diabetes or heart disease then contact us today.