Teach your child to cook for better health 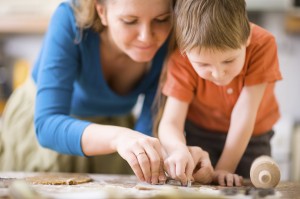 Is your child able to prepare a simple meal? Can you? A  British poll in 1994 of seven to 15 year-old children found 93% could play computer games, but only 38% could cook a potato in its jacket in the oven. Another 61% of children could programme a video to record, but only 54% could boil an egg.

A survey last year found that little had changed.
Around 45% of British children never, or rarely ever helped with making evening meals and 37% would rather watch television or surf the internet. A further 40% of children reported feeling too stressed with homework or too tired to help with food preparation.

If we are to encourage children to cook in the future then we need to look at the factors that influence their choice of foods now and the motivating factors required for them to prepare food for themselves.

By the time a child reaches adolescence US research (1) has identified four levels of influence on children’s eating behaviour:

Irrespective of age, hunger will always motivate children to seek out food. probably the biggest change in the last 20 years has come in the remaining three areas.

Where in the past children may have been around home and observed or helped their families with chores such as making porridge, picking vegetables from the garden, shelling peas, today’s children are busier with after-school activities.  In addition the family unit has changed with 23.7% of New Zealand children now being raising by single parents. Now 64% of two parent families in NZ rely on both parents working (34% of families have both parents working full-time). As family life become more fragmented and busier there is less time for parents to teach their children how to cook. Also fewer families have the time, skills and inclination to plant gardens.

There is also important British research (2) now regarding parental role modelling and the influence that parents own eating habits have on children and the value placed on food as being important to health and fitness. The good news is that American research (3) shows children do value family meal times as an opportunity to share the days events and bond with family members.

Some schools have replaced their cooking rooms with computer facilities thereby removing the opportunity for children to gain the practical survival skills of cooking.

Despite this school is still a very important place to learn about food and real progress can be made in teaching children about healthy eating when the school has a food policy in place that ensures the food sold in tuck shops reflects healthy food guidelines taught in the classroom.

The role of convenience foods and takeaways

There is now a greater range of pre-prepared and takeaway foods available than in the past, which contribute to parents and children failing to learn many of the basic skills of home cooking. Unfortunately these foods are often more expensive than home cooked food and a source of excess salt and fat. As the poverty gap widens it becomes even more important for families to learn how to cook cheap, easy meals and snacks that are also nutritious.

Research in the UK(4) has confirmed that food advertizing on television does have an influence on the food choices that children make and has been shown to increase the consumption of fat and sugar by promoting foods such as takeaways and soft drinks. The influence that this has on the health of children is likely to grow as advertising infiltrates social media channels. There has been a 17% rise in cellphone owner ship in NZ since 2006 and now one in four children aged 7-10 years own their own cellphones.

Progress is being made

To tackle these sorts of problems in the UK the City University London has initiated the Can Cook program offering cookery classes to parents and children. The researchers have found that increasing cooking skills has increased the consumption of fruit and vegetables amongst participants with a 27.5% increase in the number of pupils eating vegetables four times a day. The increased cooking skills and knowledge about food preparation has encouraged participants to explore new foods and taste sensations and helped them to gain personal confidence and self-esteem. Overall this has also translated to a reduced intake of fat, sugar and instant and microwaved meals.

Researchers (5) in Finland and Melbourne’s Murdoch Children’s Research Institute have found that just one serving of vegetables per day could help children reduce the risk of obesity, high blood pressure and high cholesterol in adulthood conditions that can lead to type 2 diabetes, stroke and heart disease.

Altering the way we communicate with children

Teenage children love to surf the internet, to text their friends, to browse and interact online. So teaching children to cook using u tube demonstrations, website and Facebook videos is a clever way to motivate children to cook and is the brainchild of New Zealanders Claire Gourley and her mother Glenda.

Together they have created a dual act. Claire’s website offers videos aimed at teaching basic cooking skills and her cookbook It’s my turn to cook tonight can be downloaded from her website. Glenda’s website foodsavvykids.com offers advice and an e-book for parents on how to communicate with their children around food preparation, changing meal patterns and trying new foods.

During the October school holidays Claire (with Glenda help) has successfully run an online school holiday cooking program. This captured the imagination of children age 5-16 years and has been met with rave reviews from parents, children, grandparents, caregivers and friends. Not only have children and parents reported having loads of fun cooking and taking part in competitions but also children have gained confidence in cooking family meals and parents have reported that siblings have bonded while cooking together.

The future for such programs, that can harness our children’s imagination, desire to learn new things as well as filling the hunger gap, is huge. The earlier that we can involve children in food handling the better it can be for their long-term health.

Even at a very early age children can be encouraged to help with the meal preparation.  Learning to count fruit into a bag at the supermarket, to weigh, measure out, and mix ingredients when baking all contributes to their understanding of science and mathematics.

Be prepared for a mess

While it may be quicker to do everything yourself – and you may, initially, have to lower your expectations of the finished product – taking a few extra minutes to teach a child how to make a salad or roll out dough can in the long run be beneficial to family life by promoting togetherness.  It also shares the workload, particularly in respect to working parents.

Here are some of the things your children might be able to help with in the kitchen as they grow older.  Obviously this is just a guide since children develop confidence at different rates:

Three to four-year-olds: scrub potatoes; make toast; help set the table and clear it after the meal; learn to identify and pick parsley or other herbs from the garden when needed; butter own bread and make a simple sandwich; make fresh fruit salad with supervision, beat up eggs, mix things, ice cakes, make jelly.

Five to seven-year-olds: make cheese toasties using a griller or toasted sandwiches in a pan; cook a simple meal like baked beans or spaghetti on toast; grate cheese (with care); grill sausages or chops; make pancakes, scones, muffins, Belgian biscuits, fudge cake, and so on; bake a potato; make porridge; make bread over the holidays.

Ten to 12 year-olds: cut up meat and vegetables for a casserole; make an omelette or poach or boil an egg; cook rice or pasta; make custards; sauces, and milk puddings; bake a cake help prepare a barbeque.

For more ideas on tasks that children can undertake at different ages visit food a fact of life.

Simple rules of safety and hygiene should be taught from the time a child uses the toilet or sits up to eat: For more information read Lea’s article on teaching children food hygiene.

If you would like to discuss any of these issues with regards to your own families health then do contact us we would be happy to help.

4. Effects of television advertisements for food on food consumption.
www.nutrition.wsu.edu/ebet/background.html

5. Daily serve of vegetables during childhood vital to health. www.mcri.edu.au/…/daily-serve-of-vegetables-during-childhood-vital